It’s no secret that I am fascinated by entrepreneurship related stories. I think entrepreneurs are creators, people who bring ideas and concepts to life. Such stories and experiences leave me wondering what we could achieve as a country and continent if we embraced those perspectives. The ability to see opportunity where others do not see is not common and entrepreneurs have the ability to shape the way we live our lives much more than the politicians can, but that’s a story for another day. In the recent past, i have read about the founding of PayPal and how it came to be. Basically, it’s a story about Peter Thiel, Elon musk, Max Levchin among other guys who were instrumental in founding of PayPal. They later sold the company at $1.5 billion to eBay in 2002. These guys, both founders and early employees, have gone on to form many other tech based companies through networks and partnerships and they have helped form or been part of many other companies in Silicon Valley. The trio is famously known as the ‘PayPal Mafia’. Companies such as: Tesla, SpaceX, Linkedin, YouTube, Yelp, Palantir among others are closely related to the PayPal Mafia. This shows the power of networks and maintaining professional contacts. The case of PayPay is basically about success. This blog post is basically about ‘the beginnings’ and I curated a few other experiences about some of the experiences that  entrepreneurs and other personalities underwent as they began their journeys. 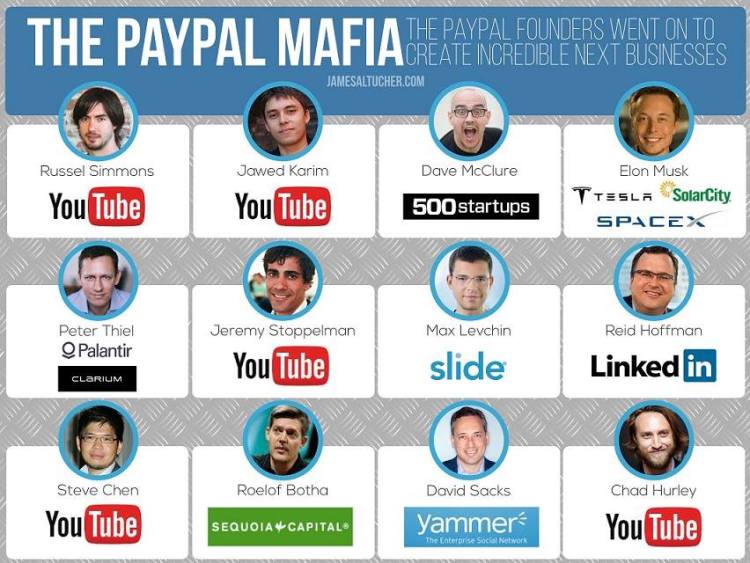 For example, did you know Elon Musk partnered with a friend in college and turned a fraternity house into a night club? These guys rented a 10 bedroom house and turned it into a part time club and made extra money on the side. Richard Branson, the Virgin Atlantic guy, began by starting a magazine. Branson interviewed people and featured them on the magazine. it became a success despite he and the team not having any experience in that kind of business.  The CEO of Goldman Sachs, Mr Lyod Blankfein used to sell sodas during matches. As people watched football (American Football) the guy sold sodas to people and he found a way of making some money on the side. Others like Hillary Clinton had a stint at selling fish in between studies at Yale.

Then there are others who had a lot of trouble and discouragement.  Jack Ma (ALibaba) on the other hand had interest in learning English and would guide tourists in his local area for 9 years in order to improve his English. The guy also failed university entrance exams three times. He later became a teacher. Ma went to US and heard about the internet the first time in 1994 and started a company to create websites for other Chinese companies because he realized internet had not yet picked up in China. Now the funny part is that when he first began the website building business, he invited people to his house to come and witness it. It took 3 hours to load half a page. Guys drank, played cards and watched TV as they waited for half a page to load. waah!

Apart from first business ventures, I also found out some interesting aspects of famous entrepreneurs in their respective fields. For example, Thomas Edison, the guy who developed the electric light bulb, was told by his teachers that ‘he was too stupid to learn anything’. (LOL).  How about this-Walt Disney was fired from a newspaper company the reason being ‘he was not creative enough’. JK Rowling (the person behind Harry Potter stories) was also fired from her job as a secretary because ‘ she spent a lot of time daydreaming’. Well, see where her daydreaming has taken her now. And Oprah Winfrey was first fired because ‘She was unfit for TV news and she was too emotional’. Jerry Seinfeld, an actor, did not actually know he was fired; the guy showed up and found his part of script for a read-through was missing, and this was in middle of shooting a movie. There are also other success and failure stories from African entrepreneurs that can serve as important lessons. The problem is that they are not amplified much and celebrated as it is in the case of entrepreneurs in the western world. We therefore need to do more especially in the mainstream platforms so show that indeed people can make it in Africa. For example, take the story of Anda Maqanda, South African electrical engineer who decided to start his own engineering company instead of looking for formal employment in 2008. However, he failed terribly at first and had to seek formal employment because things did not work out as planned. He re strategized and with the knowledge gained revamped the company in 2010 and now employees more than 150 people and has expanded to other cities including Nairobi. There are also very many others in Kenya and beyond that need to be shared more in order to resonate well with Kenyan and African entrepreneurs.

I believe that it is not a must to fail in the first business in order to succeed. Neither is it a guarantee that when you fail in the first venture then you will succeed in your next. It depends on the lessons learnt. Everyone has their own story, but the bottom line is that we must all undergo through the learning curve. I have realized from these people that learning the lessons, being vulnerable are all part of the business. But as long as you keep an open mind; a mind-set wiling to learn and try new things, then success is not very far away.

I am Chris. Welcome to my blog. I am passionate and write about all things startups, technology and personal learning. I fancy myself a tech/startups curator. Trying to understand technology, markets and communities and building things around that. Also want to travel more and rookie adventuring investor. wish me luck. View more posts

2 thoughts on “The Beginnings”